The indigenous people baptized these hills with the name for a root in the Quechua language, Llallagua, because the potato-like geological formations appeared to be a root of good fortune. There, Simón I. Patiño, one of the tycoons of Bolivian mining, found the richest layer of tin ore in the whole world at the end of the 19th century. From that time on Llallagua became the new Potosí, and Simón I. Patiño, who fought the boulders like a conquistador without a sword or armor, became the new King of Tin and, with Ford and Rockefeller, one of the few multimillionaires.

When I came to live in Llallagua, where everything is one rock on top of another, I didn't know Patiño, and I didn't see his wealth distributed among the hungry people of this land, except for his company's modern machinery, which shredded the pieces of ore with the same intensity that it shredded the lungs of the miners. What happened in Llallagua is a familiar story: some hauled off the dough and others pocketed the silver. So, the fact of living the way I lived, in a house with no electricity, no drinkable water, no gas stove or glass in the windows let me understand that life is like a funnel, wide for some and narrow for others.

In that peripheral zone of Llallagua, where the houses look like the normal extension of the ground, my childhood took place with no other consolation than dreams and hopes. I lived the way inhabitants of the high plains of the altiplano live, on the slopes of rock and four thousand meters above the level of extreme misery. Nevertheless, I knew that the famous Siglo XX mines, just on the other side of this river, fed its wealth to the world in exchange for poverty.

Conscious that the tin ore which they were extracting from the heart of the mountain, and was petrifying their lungs with silicosis, was coming back to the nation in the form of arms and money, which the rich were using to perpetuate massacres and plot political coups, the miners with the most advanced revolutionary doctrine in hand set out belligerently to fight for better living conditions. These actions the powers in control took charge of countering and drowning in blood. The massacre of Uncía happened in 1923 and the massacre of San Juan in 1967; a tragic event that I experienced at close range and of which I still have a hair-raising memory. This happened the same year as Che's guerrilla warfare in Nancahuazú; government spies made Isaac Camacho, the leader of the miners, disappear. I last saw him when he came to my house bundled up in a black coat, a cigarette in his mouth; that was just a few days before he was taken prisoner and disappeared.

If it is valid to suppose that environment is decisive in the formation of the character of an individual, then it is logical to conclude that mine is like the arid, rocky topography of the high plains. Understandably as a boy, even among friends, I always felt out of place, like a guest, made of stone; I was meager with words and suspicious of strangers. But this didn't prevent my playing soccer on the field of rocks piled between rough, stone walls and the river, with our soccer ball made of rags, our feet mangled on sharp rocks. At nighttime, we gathered on this same ground and told tales of enchantment and ghosts. After the smaller children were taken to bed, the older ones, sitting around an oil lamp, went from ghost stories to dirty ones, and made a racket that echoed on the high riverbanks.

Sometimes the kids ganged up and we faced off in a battle with boys who lived on the street up from us. They came down and attacked us with slingshots whirring, while, protected by shields of tin, cardboard or wood, we resisted the onslaught with more anger than weapons. It was a fact that on this river, dry in summer and flooding in rainy season, more than one kid ran back to the breast of his family with his head split open by a rock.

In this town, where the streets and houses had been built without architectural precision, the first bastion of labor unionism was born and the dice thrown for the economic fortune of the country, until the government of Victor Paz Estenssoro issued decree #21,060 in 1985, forcing the mining families out on the street, moving fired miners to the cities as displaced.

Llallagua ceased to be the laboratory for the Bolivian revolution, and the Tío (the miners' god of Good and Evil); lord and master of the miners and of the mineral riches, was left abandoned in the caverns. And what is worse, when someone lit a candle near boxes of dynamite that a shopkeeper had stored, at a distance several houses looked like a handful of flames climbing the hill, and they ceased to exist. The explosion, as a friend of mine coming through Sweden told me, had terrible consequences; the corrugated metal roofs flew through the air and left the walls standing in their original state, a gruesome fact that I didn't want to accept. I felt as if part of my childhood was left hanging in the air.

However, this photograph captured by Michel Desjardins, and published in the book Bolivia, beskrivning av ett u-land (Bolivia, description of an undeveloped country), by Sven Erik Östling, has been sufficient reason to reflect on the tragedy of this mining town in the Andes, and to remember, with a strange love-hate sensation, the house of my childhood; the very one that through the ups and downs of fate and through the cursed explosion of dynamite that scattered it over the river, I won't see or step into for the rest of my days. 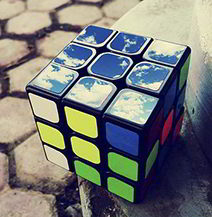